I saw this great infographic on Twitter today, tweeted out by @Zemanta pointing to Quicksprout.com where Neil Patel put together this blog post and the infographic itself. 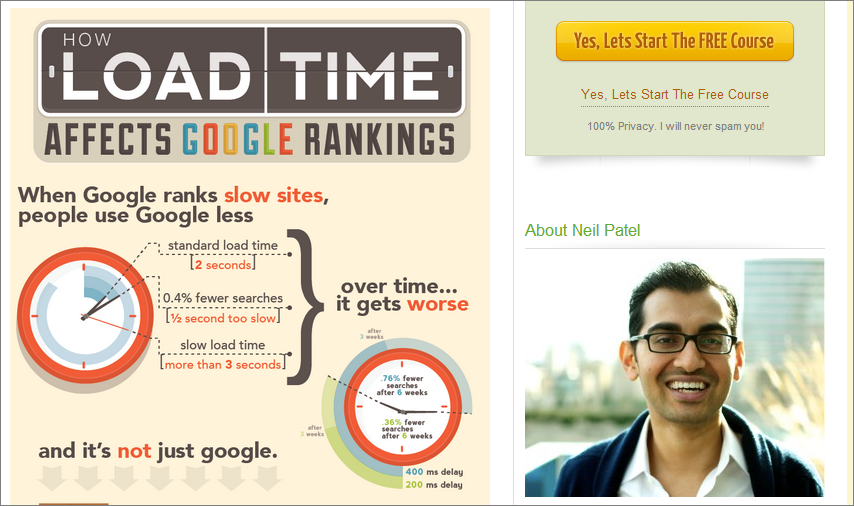 When it comes to page load speed and how that will impact SERPs and in turn traffic driven by SERPs, I have never really had a very incisive explanation ready for people that I speak with, however Neil did a great job of making it understandable.

For that very reason, in April 2010, Google started to take load time into account when they rank sites. It wasn’t because you wouldn’t go back to those sites that load slowly… instead saw a trend, in which when they ranked slow websites, you would use Google less. And if you used Google less that meant they would make less money from ads and you would start to use other search engines.
See full story on quicksprout.com

His solution is solid.  It ultimately recommends learning more via QuickSprout and then getting an invite to Google Page Speed.(if you can)
In my own opinion, I think that for people running WordPress powered websites there’s another excellent alternative.  Simply move your hosting plan to a WordPress Premium host like WP Engine or The Zippy Kid.  They include image CDN services typically, handle all the server and WordPress optimization for you.  And if you want to take it up yet another notch, run CloudFlare on your DNS as well.
If you can get into Google Page Speed, more power to you.  If you can’t and or run a business and need to take positive steps in a good direction, but don’t have the bandwidth to learn how to manage your own server or can’t afford to hire someone to do it for budget reasons, well that’s exactly what premium WordPress hosting is for!